Morihei Ueshiba, the founder
of Aikido, who practitioners affectionately call O’Sensei, or “Great Teacher,” founded the art in the 20th century.  He was a military soldier and martial artist who defended political and spiritual leaders of his time and studied several types of military arts.  Eventually, O’Sensei began to develop a blend of these arts into what is today known as Aikido.O’Sensei took Aikido from several martial arts and other disciplines.  He studied several military and martial disciplines and used them all as a blend to defend, block, redirect energy of oncoming opponents or energy.  This is the essence of Aikido – to blend with the energy and redirect it to cause as little harm as possible to oneself and opponent. 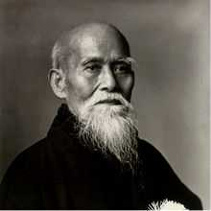 Aikido differs from most martial arts by blending with the motion of the attacker and redirecting the force of the attack rather than opposing it head-on.  It is often known by its falls, throws (similar to judo), joint locks (similar to jujustu), sword work (similar to iaido and kendo), circular motions and fluid movements – graceful, dance like qualities (like tai chi).  The combination is powerful and effective.

Aikido is taught to civilians and police departments around the world due to its underlying principles:

Aikido takes many years to master, like most martial arts with some techniques being called “20 year techniques”, but aiki techniques and keeping a cool head can be useful in many situations.

Aikido stresses learning to blend with oncoming energy – in physical and mental martial arts – on the mat in everyday life.  Easier said than done, but again, practice is key.