Knoxville Aikido Dojo was founded
by Sensei Tom Moore, third dan. Moore Sensei studied with Gaku Homma of Denver Aikido Nippon Kan, who received his training under with Morihei Ueshiba, the founder of Aikido.Knoxville Aikido Dojo chooses to remain an independent non-profit dojo in the spirit of our Knoxville founder’s wishes.  All money that comes in from dues is spent to pay the dojo’s bills.  None of the instructors are paid for their time teaching as it is part of our mandate to further ourselves and those around us.  The dojo teaches traditional Aikido, and students are free to visit other schools and to attend seminars to learn more about other group’s styles.Students choose to learn as much or as little as they wish about the cultural and spiritual roots of Aikido.  Some students choose to learn only the physical technique and others want to learn more about its background and philosophy. All are encouraged to do what they feel comfortable with. 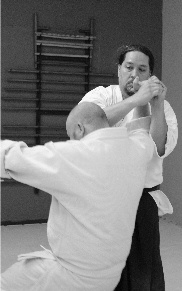 Chief Instructor, Andy Welshan is a Sandan in Aikido.  He has studied Daito-ryu Aikijujutsu.  He is also a Sandan in Ishinryu Karate where he is also an assistant instructor.

Sam Davis is an instructor in Aikido holding a Nidan.  He has been a student in Satori Ryu Iaido since 2008.